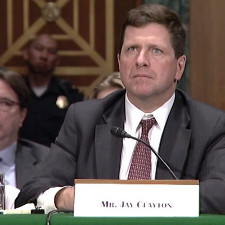 Yesterday, the Senate Committee on Banking, Housing, and Urban Affairs heard testimony from top US financial regulators on cryptocurrency markets. Over the course of about two hours, Securities and Exchange Commission (SEC) chief Jay Clayton and Commodity Futures Trading Commission (CFTC) chairman J. Christopher Giancarlo explained to the Senate Committee members much of what the crypto investment community already knows. In short, crypto markets should be regulated, but they haven’t got a clue how to go about doing it.

Both the SEC and CFTC have been active in the cryptocurrency markets for years. However, their approach has been piecemeal – cleaning up the market by busting one bad guy at a time. To their credit, the feds have intervened in some serious crypto scams recently. Last September, the SEC filed suit against REcoin, an ICO which had allegedly defrauded investors by falsely claiming it was backed by real estate holdings.

At the same time, the agency cracked down on another coin claiming that is was backed by diamonds. Now, Bitfinex – the world’s largest cryptocurrency exchange – is facing possible regulatory action from the CFTC. The agency is skeptical about whether the exchange has enough cash reserves to substantiate $2.2 billion in circulating Tether coins, which are supposed to be pegged to the U.S. dollar.

Without a doubt, there’s some fishy stuff going on in the cryptocurrency world. If virtual currencies are ever going to evolve into a mainstream financial product, the market needs to clean up its act. But with over 1,500 virtual coins traded across thousands of markets, federal regulators will never catch up by taking them on one at a time.

With the growing number of ICO scams out there, most crypto investors would appreciate some government intervention. But in a financial market characterized by decentralization and anonymity, what would a coordinated regulatory strategy even look like?

Crypto prices briefly rallied after the Senate Committee hearing. Bitcoin prices climbed from a low of $6,141 on the morning of the hearing to around $7,600 at press time. While investors don’t usually react bullishly to signs of increased financial regulation, federal oversight was taken as a positive sign for the future of the market.

Serious cryptocurrency investors were relieved to hear that the federal government is also taking cryptocurrencies seriously. The market has been inflated by fraudulent products and price manipulation, which may be causing a bubble that will cost the world economy billions when it bursts.

Cryptocurrencies have also been an increasingly attractive target for cyber criminals and identity thieves, who altogether have absconded with hundreds of millions of dollars from private wallets and exchanges alike.

Regulation wouldn’t just curb fraud and price manipulation, it would also open the door to more blockchain-based financial products. Thus far, the SEC has been dragging its feet on tackling new virtual currency-based securities like Bitcoin-backed ETFs. However, once the agency gets more control over cryptocurrency markets, they are much more likely to approve derivatives.

For his own part, the SEC boss is “very optimistic” regarding the new financial technology underlying the crypto craze. “At the same time,” says Clayton, “regardless of the promise of this technology, those who invest their hard-earned money … deserve the full protections afforded under [federal securities] laws.”

By and large, cryptocurrency investors agree that cryptocurrency should be regulated, and the federal financial regulators are perfectly well suited to lead the charge. However, what remains to be seen is how exactly federal agencies will regulate cryptocurrencies. The SEC and CFTC heads touted a coordinated regulatory approach, but whether and how they will accomplish such a feat is a mystery to even them.