How to Spot an ICO Scam 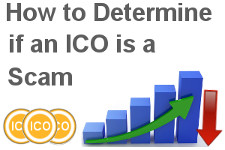 Cryptocurrencies have been receiving a lot of attention in the investing community due to the astonishing gains made by Bitcoin, Litecoin, and Ethereum in recent years. Bitcoin has risen so high that it has recently flirted with $20,000 and some believe it can still go higher. However, even though many people have made substantial amounts of money investing in cryptocurrencies, many others have also lost a lot of money.

This is because many people choose to invest in new ICO’s, which can be a lot riskier. If you have never heard of an ICO before, it is an abbreviation for initial coin offering. An initial coin offering is essentially just a virtual token offering for a company or for another venture. The aim of ICO’s is to raise money from members of the public without having to go through wall street by means of an IPO, or initial public offering.

Many businesses have been choosing ICO’s over IPO’s lately because going the traditional IPO route can be very time consuming and expensive to set up. The way that ICO’s work is similar to how IPO’s work however. The main difference is that with an ICO, virtual coins are bought instead of shares of a company or stocks. However, in either case, the assets can be sold after the initial purchase, and the company benefits from the funds generated by their initial sale.

Why Are ICO’s So Risky?

The reason why ICO’s are so risky is because they are vulnerable to both massive volatility and to outright fraud. Because ICO’s are not very well regulated, they have become something of a target for scammers looking to create large-scale pump and dump schemes. With a pump and dump scheme, the people who offer the ICO try to drive the price up very high briefly (the pump), and then once it hits a certain point, they then sell their entire interest (the dump).

The end result of such schemes is that anyone who is left holding coins from the ICO can see the value of these coins decrease dramatically. In other words, the organizations who create ICO’s cannot always be trusted.

The risky nature of ICO’s has led some governments to take action. The most infamous example of this happened on September 4th, 2017, when China banned ICO’s and made them completely illegal. China is not alone, however, as ICO’s are still illegal in many countries around the world. With all that being said, hundreds of millions of dollars are still being raised by ICO’s every single month.

Are All ICO’s A Scam?

By nature, an ICO is not a scam, and not every individual ICO is a scam either. In fact, many are very successful and do what they are designed to do: help investors make money while also helping the company make money. Some of the most successful ICO’s in cryptocurrency history have included Ark, Komodo, Lisk and Veritaseum.

The underlying concept of an ICO is actually a very interesting technological advancement and will probably continue to be heavily used unless it is outlawed. This is because ICO’s essentially help companies raise funding faster than they would otherwise be able to with an IPO. In the future it is possible that the ICO market may even rival the stock market as more and more companies sell coins to make money instead of stocks.

Luckily for investors, there are a number of signs that can indicate an ICO might be untrustworthy, and that it might be a scam. Below we have compiled seven of the most common signs associated with previous ICO scams.

Most strong and legitimate ICO projects will include the names of the team leads and developers who have worked on the project. The purpose of doing this is to help create a sense of trust and ownership. It helps to create accountability. Generally, when people set out to create an ICO scam, they do not want to get caught or be held accountable. So, if an ICO does not have named team leads or developers associated with the project, then you should be very suspicious.

Usually, when a legitimate ICO is being launched, the company behind it will take the time to create very strong websites and whitepapers that explain, in full detail, the value of the project and all of the reasons why people should invest in it.

If an ICO is a scam, there will, of course, be no good reason why people should invest in it. This means that the people behind it will often skip the step of creating a strong website or whitepaper to support the ICO.

3. Lack of a Clearly Laid Out Roadmap

For most companies who create ICO’s, the ICO is just the first step on a series of other steps that are designed to propel the company forward into the future. So, if there is no clear roadmap associated with the ICO, then it is a major warning sign. A lack of a plan for the future is a very good indicator that the people behind the ICO are probably not planning on it being around for very long, because they are planning to pump and dump it.

4. A Heightened Expression of Urgency

If an ICO suddenly starts putting out a lot of hype about time limits and a need for urgency, then it is definitely something to watch out for. Many ICO scams rely on the so-called “FOMO,” or fear of missing out. So, the people behind these scams attempt to generate a large amount of FOMO in a very short amount of time with aggressive urgency campaigns. Then, once the ICO launches, they simply wait for FOMO to push the price up, and then sell. So, watch out for urgency campaigns and ICO’s who are trying to capitalize on FOMO.

ICO’s are generally created as an effort to generate a certain amount of capital that can be used to help a company fund a specific project or projects with growth as the end goal. Most legitimate ICO’s will state the amount of funding that the company aims to get with the ICO. For example, a company may be seeking $10 million from the ICO, $20 million, $30 million.

If the company or organization behind the ICO has not stated a specific amount of money that it is seeking to gain, then it could be an indication that the goal of the ICO is not actually to fund the company’s growth, but rather to scam investors. So, this is also something that you should watch out for while you are looking for ICO’s to invest in.

This is one of the simplest ICO scams, yet it can still create many victims. With a fake email phishing scam, the goal of the scammer is not to create a pump and dump scheme, but is instead to get the email recipient to click on a click which allows the email sender to steal personal information from the email recipient, either through a key logger, or by other means.

A key logger is a program that allows a hacker to see which keys are typed in on a keyboard, which can reveal back account passwords, cryptocurrency exchange passwords, etc. So, sometimes scammers will set up a fake ICO and use it as a phishing scheme to try to get people to click on links in the email.

If the ICO has a structure that resembles a typical pyramid scam in any way, then this could be an indication that it is a Ponzi scheme or pyramid scheme. Such a structure would typically involve multiple tiers where people are encouraged to bring in new buyers and are rewarded for doing so, and in this way, money flows up the pyramid.

Such schemes usually collapse when an insufficient number of new buyers are brought in and everyone stops getting paid. So, if you see any ICO’s with this structure, then you should be very cautious if you are thinking about investing.

How to Avoid Getting Scammed

If you want to get into the ICO game, then you should know that it is one of the riskiest sectors to invest your money in. Yes, if you invest correctly, there is a strong potential for making great returns. However, if you invest in the wrong ICO, then you could easily see your entire investment or at least a significant portion of disappear. This has already happened to many people and it is definitely a real problem.

However, if you still want to invest despite the risks, then the first thing that you should do to avoid getting scammed is to look for the above signs of a scam. If you see any of these, then it may be wise to look for a different ICO to invest in.

Another step you can take to reduce your risk of getting scammed on an ICO is to look for the ones that are getting a lot of news coverage. The news industry is designed to search for truth and to publish stories that are of interest to large numbers of people. So, if the news is covering a particular ICO, then that means that there is a heightened level of scrutiny on it. Scammers do not like to be scrutinized.

As a last resort, make sure you use some good old-fashioned common sense. If something feels wrong or sounds too good to be true, then this could be another indication that there might be a scam going on. After you have done all of these things, if you plan to move forward with your investment then you should really be careful about how much money you put in.

ICO’s are not something that you should bet the farm on. They are one of the most high risk investments out there, and you should not invest too much of your net worth into them. So, do your due diligence, and try to avoid exposing yourself to too much risk by limiting the amount of capital that you put forth into the investment.

ICO’s are very exciting for both investors and for companies because they can speed up and reduce the costs associated with fundraising. This can help companies grow faster and it can also help investors to make returns much faster than they might do with stocks. However, there is also an immense amount of risk associated with ICO’s.

The risk of investing in ICO’s is not aided by the fact that because ICO’s are so new, there is often less government regulation. However, the fewer regulations of ICO’s is also partly what makes them cost less than IPO’s. So, there is a value trade off.

Investing in ICO’s is definitely not for the faint of heart, and it is usually not advisable for people who are in bad financial circumstances or those who cannot afford to sustain significant losses. For people who have some extra cash lying around, ICO’s can make for very profitable investments if the scams are avoided. So if you can successfully avoid the scams and prevent exposing yourself to too much risk, then ICO’s could be a high-risk/high-reward investment.