As the USD Falls Against the Euro, Could Cryptocurrency Act as a Safe Haven?

The USD has reached a 30-month low against the EUR, briefly cracking through 1.19 (USD/EUR) on August 2nd. Although some experts expect the trend to continue, there is quite a bit of volatility in the market right now because of a heightened global political atmosphere. The future is yet unclear, but possible undervaluing of the Euro presents a possibility that the USD could go as low as 1.30. 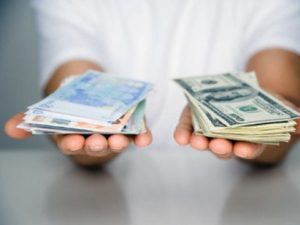 Why is the greenback dropping? Well, the current circus surrounding US-Russia relations and other things relating to White House matters is causing global investors to shy away from American-assets.

It has been a tough few weeks for the White House–new information revealed that President Donald Trump was involved in the creation of a misleading statement about the nature of his son’s meeting with a Russian lawyer during the presidential campaign last year. The White House also saw what seems to be the end of the “repeal Obamacare” saga, after the the latest attempt failed. Not to mention the Anthony Scaramucci fiasco. In short, the American government’s very public dysfunction is causing investors to be wary about the future of the American economy.

Additionally, ADP Payroll Processing revealed that only 178,000 non-farm jobs were created last month, about 7,000 short of the expected 185,000 for the month, and down from the 191,000 that were created in June. These less-than-stell reports may be an additional indicator that the US economy may be approaching some sort of fluctuation or longer-term downward trend.

Though using cryptocurrency as a safe-haven for cash may seem like a rather “fringe” concept (and at this point in time, it very well may be), some members of the crypto community adopted this philosophy very early in the game. The attraction for them was the decentralized nature of the currency. In the world of fiat currency, governments fail. Wars start and end. Cash loses its value because of political turmoil.

Cryptocurrencies, on the other hand, are decentralized. What that means is that no government or single entity holds control over them. Rather, they are owned and supported by a network of users; there is no “central command”. In this way, they are not as susceptible to fluctuations in value due to political turmoil (although it must be said that there is no shortage of fluctuations that happen for other reasons).

However, the way that Bitcoin was developed does allow some possibility for centralization. Bitcoin uses the Proof-of-Work algorithm, which allows users to “mine” for coins. Entities which are able to construct large and expensive “mining rigs” to obtain Bitcoin are therefore able to obtain large amounts of Bitcoin, and can use their holdings to “play” with the markets to take advantage of changes in value to their own benefit. Large buys and sells from individual entities can cause large market fluctuations.

There are cryptocurrencies that have been developed with safeguards against centralization. Not all coins are built on the Proof-of-Work algorithm that favors users with more resources. For example, Peercoin is one of several coins that utilize the Proof-of-Stake algorithm. The Proof-of-Stake algorithm uses a system of random user assignment to “mint” new coins. Coins can be “minted” on any device, and “minters” do not need expensive equipment to create their coins.

Cryptocurrencies are much more volatile than conventional currencies, but there are a few currencies that have been designed to behave a bit more like traditional assets. For example, Peercoin was developed as a “stable backbone coin” that is less vulnerable to large fluctuations in the crypto market. True to its word, the time period between 2015-2017 was very stable–the market cap hovered around the same level, though there was a bubble in 2014, and there has been some recent growth as well.

Major investors are starting to take cryptocurrencies such as Bitcoin more seriously and cryptocurrency hedge funds are becoming a hot commodity. This, combined with the relatively unstable global political scene of the moment, makes the idea of cryptocurrency as a safe haven may become more comfortable. However, we can be sure that until the volatile nature of the major cryptocurrencies is quelled, this practice will not be adopted on any sort of large scale.