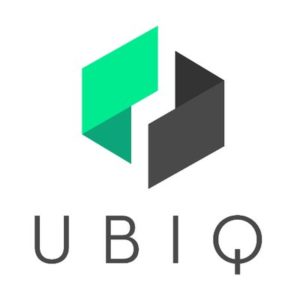 Ubiq (UBQ) is the native cryptocurrency token of the Ubiq platform. Ubiq is much more than just a currency alone, as it is an all-in-one blockchain platform with smart contract functionality. While other blockchain-based digital currencies like Bitcoin and Litecoin strictly serve as a method of payment and/or an investment vehicle, Ubiq is so much more than that.

While you can transfer Ubiq tokens like other forms of digital currency and use it to pay for goods, the platform its built on offers so much more, as it is a fully open-source distributed computing platform built on the blockchain. In the following sections, we will explain everything there is to know about Ubiq, as well as how you can make use of it.

Compared to some of the more established cryptocurrencies, the UBQ token is relatively inexpensive. However, the value of the coin has risen considerably since its inception and there are many people out there who see a lot of untapped potential. It does have relatively low liquidity compared to other big market cap coins, with daily trading volumes often falling under $1 million USD.

Thinking of Ubiq in the same way that you think of Bitcoin is not exactly correct. This is so because while Bitcoin is a cryptocurrency, Ubiq is a globally operating, decentralized, computer network where anyone can create applications that solve problems, perform specific functions and so much more. What makes Ubiq so attractive is the fact that it can support the utilization of applications that function via smart contracts.

Like many other digital assets and cryptocurrencies, Ubiq is run is via the blockchain. By making use of the blockchain and the capabilities therein, users can create endlessly. Taking part in the Ubiq network is as easy as downloading and installing the Fusion Wallet, which is free and compatible with all major operating systems, including Linux, Windows, Mac, and OS X.

If Ubiq sounds a lot like Ethereum, that is because the two are very similar. The major difference, and perhaps what might drive Ubiq’s popularity past that of Ethereum, is the fact that the network is stable, free of bugs, and all-around reliable. Being that a person attempting to create an application will want to do so on a platform that is not subject to glitches, attacks, and/or other sudden change, it is easy to see why and how Ubiq is catching on. Before going any further, we wanted to explain a bit more about some of the nuances of the network.

What is a Smart Contract?

A smart contract is no different than a traditional contract. It consists of 2 willing participants agreeing to an exchange of goods or services for money. In the real world, however, contracts can become time-consuming, confusing, and expensive because there are any number of middlemen you must go through.

A smart contract like those that exist on Ubiq are contracts that have been stored on the network and can be replicated over and over, thus removing the need for a middleman. A contract for goods, products, services, or anything else can be conjured up by the network to fulfill just about any type of need. In the fast-moving world of the modern day, smart contracts seem to be the most efficient way to execute business.

What is the Fusion Wallet?

The Fusion Wallet is an application that brings all of the different pieces of Ubiq together under one roof. All of your assets, projects, and contracts can be neatly stored and organized here in a way that most closely aligns with your wants and needs. You can think of the Fusion Wallet like any other crypto wallet, even though it is so much more than that and a lot easier to use than most other cryptocurrency wallets.

– Securely store Ubiq with the most popular hardware wallet for €79 –

The Cryptocurrency Behind Ubiq

Now, even if you know next to nothing about contracts, you probably know that most (if not all) govern an exchange of goods or services for financial consideration (money). On the Ubiq network, smart contracts are executed in terms of Ubiq Coins or UBQ. If I am seeking out the services of someone to review my finances, and I choose to use the Ubiq network in order to have that service need met, the person fulfilling my request will be paid in UBQ, not USD or any other fiat currency.

Now that you understand this, it should be a bit easier to understand why Ubiq is considered to be so drastically different than Bitcoin and many other cryptocurrencies. While Bitcoin is strictly a financial network that sees value transferred, Ubiq’s coin is nothing more than the glue that holds the Ubiq network together, and makes executing smart contracts that much more streamlined.

How To Purchase Ubiq Coin—UBQ

As you could have probably guessed, acquiring UBQ for yourself is just as easy as acquiring Bitcoin. While one way of doing this would be through the Fusion Wallet, you do not necessarily need to be an active member of the Ubiq community in order to hold the currency. As such, you are able to go to many different cryptocurrency exchanges and purchase UBQ.

It is important to note that, in most cases, UBQ is only able to be purchase with other cryptocurrency. So, if you are hoping to exchange USD for UBQ, you might be disappointed. Not to worry, however, as many people simply purchase another crypto such as BTC and then utilize that to ultimately make their UBQ purchase.