Riding the Bull: What’s Contributing to the Latest Bitcoin Boom?

The price of Bitcoin has once again reached new heights, briefly expanding to nearly US$6000 at the end of last week.  This is great news for many Bitcoin holders who spent weeks in cold sweats in the wake of China’s’ legal drama that essentially ended crypto trading in the country this September.

This latest bullish run is being driven by a few factors–on top of the upcoming fork, an increasing number of financial experts and officials have publicly said that they have been won over by the pull of Cryptocurrency.  Additionally, rumours that China is planning to reverse its crypto bans have been flying, but nothing is confirmed quite yet.

Cathie Wood, CEO of Ark Invest, recently said that cryptocurrency would one day make all money transfers free; she’s not wrong.  Coins like OmiseGO and IOTA are already working to make this a reality, although Bitcoin and Ethereum have essentially been being used for this very purpose for quite some time–there are fees associated with transactions on both coins’ networks, but they are much lower than the fees associated with traditional bank transfers.

Additionally, Goldman Sachs revealed last week that it is considering offering options for crypto trading.  While it is the first Wall Street institution that has publicly admitted to doing so, it certainly won’t be the last. Harry Redknapp also recently “came out” as a crypto fan.

Pretty Forked Up: Could the Coming Fork be Fueling the Increase in Value?

The last Bitcoin fork, Segwit I (you know, the one that produced Bitcoin Cash?), also contributed to a bullish run in the days preceding it.  Experts were similarly scratching their heads then–and with good reason.  Lots of members of the Bitcoin community thought that the creation of a “new Bitcoin” (as BCH was intended to be) would lead to a schism that would eventually destroy one (or both) of the coins.

Instead, lots of people described Bitcoin Cash (BCH) as “free money”; everyone who held their Bitcoins through the split woke up with an equal amount of BCH.  Today, a single BCH token is worth just over US$300, but it climbed close to US$1000 in mid-August, several weeks after its birth.

Managing director of crypto investment at Binary Financial, Harry Yeh, told CoinDesk that “historically, one would assume that if you have one token and it splits into two, your mindset would be that both tokens would be worthless.”  However, “traditional rules of economics and finance don’t really apply in the cryptocurrency world.”

Seasoned members of the crypto community know from experience that a fork, though it may seem scary, will ultimately lead to a more diversified cryptocoin portfolio.  Besides, Bitcoin and Ethereum have weathered enough storms at this point that extreme devaluation over the long-term is highly unlikely; China’s sweeping crypto bans couldn’t even kill Bitcoin. There may be some fork-related fluctuations, but if history is any kind of reliable indicator, we can expect a similar pre- and post-fork rise.

Capitalizing on the Bitcoin Buzz

Reddit users on the /r/Bitcoin feed understand one thing very well: the more that Bitcoin (or any cryptocurrency) appears in the media, the more likely it is that cryptocurrency will experience a rise in value.  In this sense, what’s good for one is good for all–if everyone went to the top of the nearest mountain and shouted “BITCOIN!!!!” across the land, there would likely be a rise in Bitcoin’s token valuation.

That’s why many Bitcoin traders and investors will take the time to research things like Twitter indicators and Google Trends .  According to Willy Woo of Woobull.com, “the search ‘BTC USD’ serves as a proxy for the engagement of active bitcoin users as they check the daily price”. 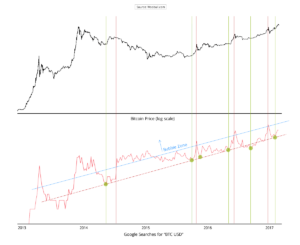 Woo notes that when user engagement levels (as indicated by Google Trends) run a bit too high in comparison to the price of Bitcoin, it can be an indication that Bitcoin is in a price bubble, and it is a good time to sell.