To Nobody’s Surprise, ECB President is a Crypto Skeptic 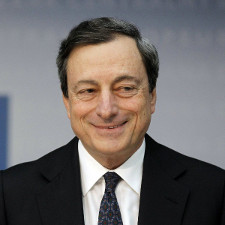 Cryptocurrencies are slowly creeping into the mainstream, and some regulators are taking the matter very seriously. The European Central Bank (ECB), however, is not among them. Just this week, ECB President Mario Draghi warned Europeans – especially young people – against investing in Bitcoin. “Frankly I would think carefully before investing,” he explained, “nobody backs the Bitcoin.”

In one very limited way of looking at things, Draghi is correct. Unlike the Euro or Dollar, Bitcoin is not guaranteed by the central bank of any one nation. However, what his surprisingly nearsighted comments fail to recognize is that – just like every other currency – Bitcoin has value because everybody backs it.

Getting Draghi and others like him to embrace cryptocurrency is a lot like trying to teach your grandpa how to use Snapchat. Eventually, you’ll get tired of trying to explain why you would want pictures and videos that disappear after a few seconds, and just give up. Dig the Polaroid out of storage in the garage, and he’ll be happy. That’s as close as he’ll ever get to instantaneous media sharing because, like Draghi, he doesn’t understand the value of the new technology.

All technophobe shaming aside, Draghi’s comments were perplexing from a purely economic standpoint. Money does not get its value simply because a centralized institution says its valuable. In fact, history is replete with examples of failed national currencies.

The Argentinian peso crashed following the OPEC oil embargo in the mid 1970s, and once the dust settled the country issued new currency (also called the peso) at an exchange rate of one to 100 billion. The Zimbabwe dollar was valued at about $1.25 USD after the nation gained its independence in 1980, but after two decades of bad fiscal policy and runaway inflation the currency fell to an exchange rate of 1 Zimbabwe Dollar to $200 million USD in 2007. One year later, Zimbabwe dollar holders could swap out the old currency for new at an exchange rate of 10 billion to one. So it went for other currencies like the Pervian Sol in the 1990s and the Chilean Escudo in the 1980s, and so it will go for any number of national currencies in the future.

Economists define money as anything that people commonly accept for the exchange of goods and services. Every country has its own monetary system, but fiat currencies are not the only things that can be used as money. Money was around for thousands of years before governments started minting coins, and it will be around for thousands of years after they stop. This is true because governments and banks don’t establish the value of money – the people who use it do.

The New Money of the Trustless Economy

Millennials came to age in a time where the government – and especially the banks – are not to be trusted. They keep global interest rates near zero to encourage debt-fueled economic bubbles, and then bail each other out when everything goes to pot. After all, they’re too big to fail, and the global economy just can’t function without them, right? Wrong.

Cryptocurrencies are the first sign that the times are changing in global finance. Central banks
like the ECB want you to believe that they are indispensable, and in many ways they are critical to the stable functioning of modern financial markets. But central banks have only been around for the past 300 years. Economic markets, on the other hand, have existed for millennia. Governments use central banks to stabilize inflation rates and safeguard consumers in financial systems, but they have a mixed record of success in this regard.