ECB Members Speak Out About Bitcoin, Suggest Regulations and Tax 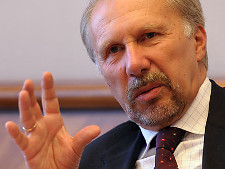 A senior council member of the European Central Bank, Ewald Nowotny, has been speaking out about Bitcoin this week. In recent interviews with the Daily Mail and Sueddeutshe Zeitung, Nowotny said that he believes Bitcoin should have more regulation to prevent financial crimes, and it should even be subject to V.A.T. (value added tax).

Speaking to Sueddeutshe Zeitung, a German newspaper, Mr. Ewald Nowotny said that the world’s most popular cryptocurrency can be used as a tool for money laundering, other financial crimes, and is an object of speculation. The official argues that the normal rules applied to financial transactions should be the same for Bitcoin, and everyone involved in Bitcoin transactions should have to reveal their identity.

The ECB official recommended that a value-added tax (VAT) should be imposed on Bitcoin, because it is not a national currency. The comments by Ewald Nowotny echo those that had been shared by other members of the ECB, who have gone ahead to regard the spectacular surge of the value of Bitcoin as a bubble. They ignored the fact that Bitcoin could be a digital competitor to the single currency of Euro used by its members of 19 nations.

According to a report published by the Daily Mail, Edward Nowotny also expressed concerns over possibilities of Bitcoin being used for purposes of money laundering. Ewald who is the head of Oesterreichische Nationalbank, Austria’s central bank, appears to share the same sentiments with Benoit Coeure, who is the executive member of the ECB.

He went ahead to state that the main concerns that surround this cryptocurrency at the moment are connected to money laundering and tax evasion. Without fixing this menace, the idea to stop printing 500-euro notes as a way of fighting money laundering will not bear any fruit.

According to Coeure, Bitcoin prices have been mainly supported by speculation, so there is a potential risk of huge capital losses and this is something that investors should be aware of.

The two senior bankers, Ewald Nowotny and Benoit Coeure declared that Bitcoin is not a currency, with the latter pointing out that investors will not be able to apply it as one of the means of payment. However, he went ahead to note that the DLT (Distributed Ledger Technology) has generally exhibited great promise for both retail and wholesale applications.

He also applauded the latest joint venture between the Bank of Japan and European Central Bank that is supposed to be used in researching use cases for the technology. While the global central banks are seeking out how to use the distributed ledger technology to replace or update the existing financial systems, he said that the technology is still too tender for any kind serious implementation.

Bitcoin is by far the most popular digital currency and its value surged to a high value of $19,500 in December 2017 from just $1,000 in the first month of 2017. After a series of recent warnings from market analysts and governments about the volatility and risks associated with it, the price of Bitcoin slipped back.

While pointing out the bubble-like features of the world’s most popular cryptocurrency, Ewald Nowotny acknowledged the whole Bitcoin topic had gotten to the heart of the society. He revealed that many people who connect with him on the Vienna metro ask him whether they should consider the decision of purchasing Bitcoin, and go against the old-time traditions like purchasing gold.

If Bitcoin were to change the behavior of most people within society, then it would be important for the Central Banks to step in. Although at the moment, signs of anything of that kind have not yet manifested.

The ECB official also pointed out that Bitcoin has been hard to use- especially as a result of the slow speed of transactions and its wild gyrations in value. This new digital gold has been a great concern to the European Central Bank mainly due to the path it has taken over the past few months. They feel that it can be used to facilitate the dodging around of money launderers, which is one of the problems faced in the financial market. It should therefore, according to the ECB officials, be used in compliance with the rules in the traditional financial system.