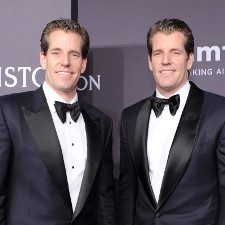 Tyler and Cameron Winklevoss – popularly known as the Winklevoss Twins, are reputed to be the world’s first Bitcoin billionaires. They claim to own as much as 1% of all the Bitcoins in existence as early as 2013 which puts them at a combined worth of more than $1 Billion dollars. In 2004, they famously sued Mark Zuckerberg, the founder of Facebook, with the case ending in a $65 Million settlement. The lawsuit forms a major part of the 2010 movie, The Social Network where actor Armie Hammer plays both twins.

Tyler and Cameron Winklevoss were born on August 21, 1981 in Southampton, New York. Their father Howard Winklevoss is a renowned academic, actuary, and entrepreneur. They also had a sister, Amanda who died in the year 2002 at the age of 23. The Winklevoss twins spent the better part of their formative years in Greenwich, Connecticut where they both attended the Greenwich Country Day School and the Brunswick High School.

In 2000, they both began studying Economics at Harvard. While at Harvard, they were members of the Hasty Pudding Club as well as the Porcellian Club. They both graduated in 2004 earning respective B.A. degrees in Economics. For their postgraduate study, they enrolled at Oxford University’s Said Business school in 2009. By the following year, they had completed their MBAs. During their postgraduate study at Oxford, they competed in the Oxford-Cambridge Boat Race.

The Winklevoss twins together with fellow Harvard student Divya Narendra created HarvardConnection in December of 2002. HarvardConnection was envisioned as a social network platform for students of the school to send and receive messages. The platform was later rechristened ConnectU and launched in May of 2004.

Before the launch of the platform, a number of other people also worked on the project. By January 2003, the twins along with Divya Narendra approached their fellow student and computer programmer Sanjay Mavinkurve to work on the platform. A few months later, Sanjay left the project after having graduated from Harvard and secured a job at Google. With Sanjay gone, the twins needed another programmer and they turned to Victor Gao, a friend of Divya’s.

Victor Gao’s involvement in ConnectU was also short-lived but before his departure from the project, he referred the twins to another Harvard student, Mark Zuckerberg. The twins and Divya Narendra met with Zuckerberg in late 2003 in the dining hall of Kirkland House at Harvard. During this meeting, the two parties, i.e. the Winklevosses/Narendra and Zuckerberg entered into a verbal agreement that would see Zuckerberg become part of the ConnectU project effectively taking over from Victor Gao as the programmer.

In 2004, the Winklevoss twins along with Divya Narendra and the ConnectU platform filed a lawsuit against Facebook for breach of contract. The lawsuit claimed that Mark Zuckerberg, the creator of Facebook, reneged on an oral contract and copied the source code of the ConnectU platform which he was developing for the twins and used same to create his own social network.

The case was settled in February of 2008 for a total sum of $65 Million. The ConnectU internet domain address was acquired and shut down. However, in 2010, the Winklevoss twins were accusing Facebook of securities fraud on account of the inaccurate valuation of Facebook stocks that was used during the calculation of the settlement offer. Only $25 Million dollars out of the $65 Million settlement offer had been in cash, the remaining $45 Million was in stocks which the Winklevosses and Narendra alleged to have been grossly undervalued.

The Court of Appeals ruled against the twins and Narendra in 2011. Both Tyler and Cameron as well as Divya Narendra expressed a desire to take the case up to the Supreme Court. They have since changed their minds about doing so instead asking for an investigation into alleged suppression of evidence by Facebook.

The Winklevoss Twins first came in contact with Bitcoin while on vacation in Ibiza in the year 2012. A friend introduced the digital currency to the pair and it piqued their interest. They admit having begun buying Bitcoin as well as studying the underlying Blockchain technology.

With their background in Economics and their experiences gained from growing up in an entrepreneurial household, the implications of the disruptive potential of Bitcoin was not lost on them. They began by investing in a number of Bitcoin-related companies and services, including Xapo, a Bitcoin wallet and vaulting service, a software firm, 21, and a number of other ventures.

Tyler and Cameron Winklevoss shot to Bitcoin fame in March of 2013 when they purchased 100,000 Bitcoins. The twins had been purchasing Bitcoin prior to this time, beginning the previous year when the price of Bitcoin was still in the single dollar digit. Having won a $65 Million settlement from Facebook, $25 Million of which was paid in cash, the twins decided to invest $11 Million in Bitcoin.

In November of 2017, the price of Bitcoin was around about $11,300 which meant that the Winklevoss twins had become Bitcoin billionaires. The value of their 2013 investment has skyrocketed by more than 10,000% in just over 4 years. The price of Bitcoin continued to rise during the last few weeks of 2017, almost hitting the $20,000 mark. They are known to be the only Bitcoin billionaires apart from the unknown Satoshi Nakamoto, the creator of Bitcoin.

The Winklevoss twins established Gemini in the year 2015. Gemini is a cryptocurrency exchange platform that allows users to buy digital currencies in exchange for fiat money. The platform operates within 42 states of the USA as well as in countries such as Singapore, Canada, Japan, and the UK. The service is headquartered in New York and it is fully licensed to offer both Bitcoin and Ethereum exchange services to its customers.

Gemini is one of the most trusted exchange platforms in the United States. A lot of this has to do with the robust security and quality assurance measures being taken by the platform. All fiat deposits made in USD are kept in FDIC-insured banks and the bulk of their crypto holdings (both BTC and ETH) are kept in cold storage thus protecting it from crypto-hackers.

The pair discovered rowing when they were 15 years old and continued on even at Harvard. While at Harvard they competed in numerous races and competitions famously finishing an entire collegiate racing season undefeated. They were part of what came to be known as the “God Squad” at Harvard.