Asian Governments and U.S. Reaction to Bitcoin in 2018 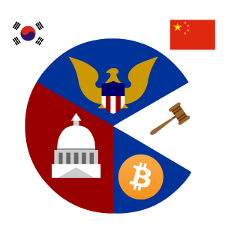 Historically, governments across the globe haven’t been all that receptive to Bitcoin. They have been very hesitant to jump on the bandwagon and some have even gone as far as cracking down by outright banning the trading of Bitcoin. Governments, while understandably seeking to protect their citizens, are often advising them against using cryptocurrencies such as Bitcoin.

Trading cryptocurrencies is a completely new and innovative concept, and this has led to a lot of confusion on whether it’s legitimate, stable and sustainable. The huge price swings coupled with various scandals do not help the already flaky reputation of Bitcoin, Ethereum and other altcoins. Let’s now look at how different governments are reacting to the emergence of digital currencies.

South Korea is the world’s third-largest country in terms of Bitcoin trading volume. In recent weeks there has been a lot of speculation that South Korea is set to outlaw, or at least regulate, cryptocurrency trading. This was initially sparked from remarks allegedly made by its Justice Minister, Mr. Sang Park-Ki. Though there has been conflicting news and information on the subject, some outlets have reported that Pari-Ki said that the South Korean government is preparing a bill to ban domestic exchanges from trading in cryptocurrency.

Even though these reports have not been confirmed, the news was part of the reason why Bitcoin prices saw a 10% decline last week. Bitcoin traders and enthusiasts were thrown into confusion over the vagueness of the statement, and the uncertainties that this ban would bring. Allegations of tax evasion by some of the top South Korean exchanges is believed to be what prompted the government to consider banning cryptocurrency trading.

The potential ban in South Korea shook Bitcoin markets; South Korea represents a significant percentage of global Bitcoin trading. In a bid to calm the market, South Korea’s presidential office has rescinded on the announcement by the justice minister. Banning, they said, was one of the options the government was considering as a regulatory measure. The public has vehemently opposed the move and even signed petitions to that effect.

Bitcoin traders in the country feel that the government is banning it due to a lack of understanding of how cryptocurrencies such as Bitcoin work. The government, on the other hand, wants to protect the public in case the Bitcoin “bubble” bursts. The government also does not want to be blamed in case of losses incurred if digital currencies were to collapse.

The minister has since softened his stance saying they were concerned more about how to regulate the non-traditional market and will work with other agencies to find a favorable solution for everyone. Consumer protection and consumer rights will have to be strictly examined in future, and this is expected to disrupt Bitcoin trading. Taxing the industry is a possible outcome, but at this point legislation to ban trading seems unlikely.

Other Asian governments are also firing warning shots at Bitcoin and other digital currencies. Most of their concerns are understandable, considering that overall, Asian countries account for more than 80% of the global Bitcoin trading. If Bitcoin were to collapse, then the region would be significantly affected.

Last year Japan called Bitcoin prices abnormal. At that time, prices rose very quickly and regulators were concerned about how a sharp decline will affect the economy. Even if trading cryptocurrencies is legal in Japan, the government continues to warn users against the speculative nature of Bitcoin. Other large economies such as China are not taking any chances with digital currencies. China has already banned Bitcoin trading and Initial coin offerings.

Other governments may not have banned Bitcoin directly but are highly suspicious of it. They discourage citizens from trading or even using digital currencies. The unregulated and misunderstood nature of Bitcoin has caused mistrust with many governments around the world, mainly because they still view cryptocurrencies as avenues of money laundering and tax evasion.

America it seems, has not discouraged Bitcoin trading and blockchain technology innovations. The marshal services even recently announced that it was going to auction over 3,000 BTC that it has in its possession. As the price stands now, the US government would make over $50 million from the auction. It would appear that, for the time being, the United States is taking a different stance from its global counterparts. By selling off its Bitcoin, the government is also giving it an indirect seal of approval.

The Bitcoins being sold off were seized by authorities in various legal cases, some involving drugs. The court-backed decision represents an acceptance by the government. It will not be the first time the US government has auctioned Bitcoins; it had previously traded in 2015.

In Africa, Kenya’s central bank governor has warned the public against trading in Bitcoin and Ethereum, likening it to a pyramid scheme. Bitcoin is viewed by the government in Kenya as an avenue for illegal trading.