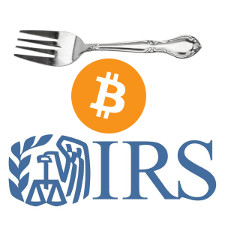 This year, three little words are raising serious concerns in the cryptocurrency community: capital gains tax. Cryptocurrency investors were flying high in 2017. With market growth at a staggering 2,000% over the year, plenty of small-time investors struck it rich. But now the new year is upon us, crypto millionaires are dealing with some unexpected consequences stemming from their new money. Among other things, they have to figure out how to report their 2017 cryptocurrency income to the IRS.

Reporting Cryptocurrency Earnings to the IRS

Many virtual currencies were crafted by the mysterious geniuses of the internet, free from the burdens of government regulation and corporate control. Now that crypto is going mainstream, however, the good old days of making money hand-over-fist in an unregulated financial environment are coming to an end. The IRS and its pals are moving in, and they’re out for blood.

Even though the IRS has had cryptocurrency tax policy in place since at least 2014, almost nobody has actually paid taxes on their crypto gains. In 2015, the IRS received just over 800 tax returns reporting gains or losses from cryptocurrency investments. Given that Coinbase had over 2 million active users that year, the IRS has a strong suspicion that the crypto community is under-reporting trading gains.

Just after Thanksgiving, Coinbase was ordered to hand over information to the IRS as part of an ongoing federal enforcement case. Specifically, the exchange must disclose the name, birthdate, address, and taxpayer ID of over 14,000 Coinbase customers, most of whom were the highest-volume traders between 2013 and 2015. Whoever they are, these individuals can expect an audit pretty much any day now.

We all miss the glory days of tax-free virtual currency investments. But all wishful thinking aside, you must report last year’s cryptocurrency earnings to the IRS this year. If you don’t, you’ll find yourself on the short list for a tax audit. With the massive fees and penalties that accrue – not to mention the possible jail time – not paying your dues to the IRS can be much more painful than just paying your taxes in the first place.

Paying Crypto Taxes is Harder Than it Should Be

Starting to get scared of the tax man? Good, you should be. This is the type of healthy fear that people normally have for things like grizzly bears and sharks. But how do you even avoid the inevitable thrashing you’ll get by continuing to evade your taxes?

There is plenty of information out there about how to report your cryptocurrency gains on your tax return. Don’t bother reading it, I’ll summarize it for you: get a good accountant. Despite all of the riveting tax literature already out there, however, there are two things worth repeating. First, not even the experts are totally sure how the IRS will treat the upcoming Bitcoin forks. And second, the Feds are most definitely willing to throw people in jail over even seemingly minor crypto-based financial crimes.

What’s the Problem With Forks?

Forked coins like Bitcoin Cash and Bitcoin Gold have already been a windfall to many crypto investors. With dozens of forks on the horizon for 2018, Bitcoin holders are eager to see whether these new coins will follow the success of their predecessors. But if they do, how will the IRS demand its cut?

If the agency makes it easy on us, you will have to report forked coins if and when you actually claim them for US Dollars. However, that’s just the best-case scenario. According to Mario Costanz, veteran cryptocurrency accountant and Director of CryptoTaxPrep.com:

“cryptocurrency investors must properly report the receipt of any airdropped coins they get from recent and upcoming Bitcoin forks. This is true even for forked coins that they have not yet redeemed.”

In other words, even if you haven’t claimed a forked coin, any virtual currency split may be a taxable event in itself. This is possible based on the IRS policies regarding constructive receipt of income. Just like a paycheck you haven’t cashed yet, you “constructively” have the income waiting for you. If the agency decides to take this approach, the IRS may decide that you owe taxes on an unclaimed forked coin due to the fact that you can collect it at any time.

But Everyone Else is Doing it…

Burying your head in the sand is not a good way to deal with things. It doesn’t even work for ostriches. And just because everyone else is ignoring financial regulations doesn’t mean that you can avoid federal prison by going along with the crowd. Over the past few years, a number of individuals and businesses have been arrested and charged with financial crimes related to the unlicensed transmission of virtual currencies and other financial crimes. Many of these people were providing very common cryptocurrency financial services, such as cash-for-bitcoin exchanges arranged through sites like LocalBitcoins.com.

The cryptocurrency craze has made a lot of people rich, which is great. But when it comes to financial crimes, the old saying is true: more money, more problems. If you invest in virtual currencies, particularly Bitcoin, be sure to consult with a tax professional to make sure you understand how, what, and when you need to disclose information about your crypto investments to the IRS. Doing so will help you avoid a potentially costly mistake.