Kathleen and Arthur Breitman, who founded Tezos, have become embroiled in a legal battle with Johann Gevers.  Gevers serves as the President of a Swiss foundation that the Breitmans helped to form, aptly named “The Tezos Stiftung Foundation”.  The foundation facilitated and promoted the Tezos ICO.

According to Swiss legal codes, the foundation holds the legal control of the massive amount of funds raised in the Tezos ICO.  However, the Breitmans have taken legal action to oust Gevers.

While the specifics of why the Breitmans have chosen this particular course of action are unclear, an attorney sent a 46-page letter was sent on Sunday to the two other members of the Tezos Stiftung Foundation’s board.  In the letter, Gevers was accused of “self-dealing, self-promotion and conflicts of interest.”

Gevers has since fired back, telling Reuters that the Breitman’s attacks are a case of “attempted character assassination” and the the Breitmans “are attempting an illegal coup.”

According to Gevers, the letter also included “a long laundry list of misleading statements and outright lies”.  He also said that the Breitmans’ actions have unnecessarily put the project at risk.

The Tezos blockchain was designed to incentivize user-sourced improvements to its functionality.  Improvements to the code, when adopted, act as a source of pay out for the users who create them.  Tezos’ blockchain is proof-of-stake, and supports smart contracts. 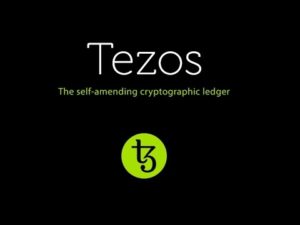 Tezos Tumbles 75% in the Wake of Legal Troubles

How “necessary” the decision to attempt to oust Gevers was is yet unknown, but the project is certainly stepping into risky territory as a result of the budding drama.

The Tezos coin (also known as a “Tezzie”) has not yet officially been launched–in fact, an official launch date for the Tezos token and platform has not yet been set.  However, the futures price of the coin has tumbled significantly–roughly 75%.

Of course, this does not mean that the funds raised in the Tezos ICO have been affected (yet).  However, if Tezos continues down its current pathway, the future of those funds is not looking very bright.

A Climate of Risky ICOs

In the past several months, legal systems around the world have begun turning their watchful eyes toward ICOs, which have been long-regarded as one of the riskiest types of investment in the world.  Of course, with the high risk can come high reward.

However, it seems unlikely that Tezos will be able to completely recover from this massive hit.  The Breitmans are not very established in the world of crypto, and such a severe hit to Tezos’ reputation is not likely to bode well for the future of the company (or the coin).

Perhaps to skirt the legal implications of offering such a risky investment, the language of the Tezos ICO described contributions as “non-refundable donations”, and explicitly stated that they were not “speculative investments”.