Is the Recent ICO Craze Bad for Cryptocurrencies? 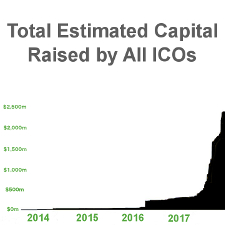 If you have been paying attention to the explosion of interest in cryptocurrencies recently, chances are you’ve heard about the massive profits that ICO’s across the world have been raising. As of April 2017, ICO’s have generated over $250 million from these crowdsourced fundraisers.

An ICO is simply a fundraising event similar to an IPO, where a company offers early access to their shares, or in this case, tokens. The difference here is that in an ICO, participants are purchasing a coin, rather than a share.

ICO tokens represent the company or platform that is doing the fundraiser, and the hope is that the value of the token will increase as the platform is adopted and used by more people. These tokens are normally created on top of existing cryptocurrency blockchains such as Bitcoin or Ethereum, while others may represent their own unique blockchains. Smart contracts guide the functionality and value of a token related to its parent company.

As the name suggests, utility tokens provide their owners a utility or use case within a given platform. These tokens function as a kind of digital coupon that can be redeemed for either use within a platform or as a rewards program for using a service. They can provide incentive to continue to use a platform, distribute wealth among participants, or establish communities and voting rights.

These tokens are unregulated and provide a great means for fundraising and getting a smart contract or other blockchain-based platform off the ground. The possibilities of the utility a token can provide a platform are endless, and we have only seen the beginning of what uses these types of tokens can provide end users.

A good example of a well done utility token is the BAT, or basic attention token. This token was able to generate nearly $30 million in about 30 seconds when their ICO opened its doors. This token is meant to be used with the Brave internet browser to spread the distribution of wealth of internet advertising.

Traditionally, ad machines will pay publishers fractions of the revenue they make to publish disruptive and ineffective spam across websites. The revenue generated by these ads wholly depends on the viewers of the content, who currently do not see a dime of this money. The BAT token seeks to remedy this by making advertisers spend the BAT to publish an ad, and based on smart contracts, the profits of these ads will be distributed to the publishers AND the viewers of content.

Users will be paid in this token whenever they decide to “view ads” in their browser, as the Brave browser blocks all spam when you are navigating the internet. Hence, the “utility” of the token is allowing for users to be paid for viewing ads, and advertisers to not horde all of the profits.

Security tokens differ from utility tokens in that they simply represent the ownership of an asset of a company. Like a stock, they can represent equity and voting rights within a company early on. Also similar to stocks, they are subject to federal regulation. These tokens do not represent the use of a platform, and they are used to help establish credibility and funds for a budding blockchain startup.

So, with these two types of tokens present, are ICO’s worth your time? It turns out there are good ICO’s, as well as poor ICO’s that have scammed forward-thinking investors out of millions.

With so much hype and value being thrown around the cryptocurrency sphere, it is natural for the fundraising of new crypto-based startups to carry equal buzz. It is hard to identify one factor that will determine whether an ICO is a good investment or not, as in order for an ICO and its subsequent token to increase in value, the company must take off. Thankfully, there are red flags you can keep an eye out for that will help to differentiate scams from honest projects.

A good ICO is one that understands whether it is offering a utility or security, and one that has a viable reason to use a token. This is critical in understanding whether a company is just trying to raise money for profit, or whether they are sincerely trying to establish a new blockchain power.

There have been many ICO’s where the token offered was promised to generate massive profits for investors, but the token ended up failing because adding a token to the platform simply did not make sense. Tokens can help create rewards programs, incentivize use of a platform, and create value for the user. Steemit and the basic attention token are some of the few examples of tokens that have a use case that could be viable for years to come.

But, there have been plenty of examples of ICO’s that were obviously just trying to convince readers to buy their token, rather than illustrate its benefits to their ecosystem.

Have ICO’s Been Bad For Cryptocurrency?

While some of the scams and fly-by-night companies that have conducted ICO’s temporarily painted them in a negative light, the recent ICO craze may actually be good for the future of cryptocurrency.

This is because ICO’s have helped demonstrate the endless possibilities of a token, including how they can connect a company with its users or allow them to create incentive to be loyal and stay on their platform. Tokens create ecosystems of use within a platform, rather than a couple activities with no incentive to the user. The massive amounts of profits made from ICO’s like Bancor and the Basic Attention Token have shown that the community believes in these decentralized projects, and that they are willing to support them.

Overall, ICO’s are still in their infancy. Currently, it is hard for Ethereum-based smart contract platforms to handle the traffic that comes with the mass-adoption of a platform, as transaction times and contract executions are too time and energy consuming.

Experts agree that we have only begun to see the possible use cases that a utility token can provide. Industry giants such as Kik, Target, and Amazon are all primed to launch their own utility tokens in 2018. The recent ICO craze has shown the weaknesses and vulnerabilities of such a practice, and taught us what works, and what doesn’t. While some have tainted the credibility of cryptocurrency, true supporters of ICO’s understand the future of this market and the importance of crowdsourcing support for blockchain projects.

There have been good ICO’s, and there have been scams. The community is learning what the best practices are and what to avoid. Without the trials of ICO’s so far, we would not have learned the what to watch out for, nor would we have discovered the power these funding mechanisms have. ICO’s have shown us their benefits and drawbacks, and 2018 is shaping up to be the “Year of the ICO 2.0.”