Kazakhstan May Soon Have its Own Cryptocurrency

New potential use cases for blockchain technology are being conceptualized every single day.  A quick look up at some upcoming ICOs reveals that there could soon be successful blockchain-based pension plans, peer-to-peer credit lending systems, and even a recruitment platform for the perfect eSports team.

National cryptocurrencies are another new trend in the blockchain world.  While no nation has yet actually released a cryptocurrency of their own, Singapore, Canada, England, and Russia have all been toying with the idea.

The Kazakh cryptocurrency would be created on Exante’s “Stasis” platform.  Exante co-founder Anatoly Knyazev said that “The development of such a system will bridge the gap between the traditional asset market and the crypto-world. We see keen interest from the market players, and we already have applications from other government-related financial institutions.” (Side note: it might be a good time to invest in Stasis.)

The tiny nation of Estonia, which sits just south of Finland, was one of the first to float the idea of a national cryptocurrency. However, the idea was shot down by the European Central Bank when its president said that no nation within the EU would be allowed to have its own national currency. 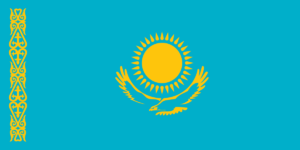 National cryptocurrencies would serve a variety of municipal purposes, and would allow the nation’s funds to be quickly transferred across borders.  Of course, a national cryptocurrency would bring a lot of quick, easy, new money into a country’s economy.

Kazakhstan has a population of just under 18 million people and a monthly per-household income of roughly US$2600 (for reference, the average monthly household income of an American family is about US$5600).  The small nation makes most of its money from the extraction of natural resources, including oil, iron, and various metals and minerals.

The technological industry in Kazakhstan is growing, slowly but surely. In 2015, the former Soviet State hosted TechConnect, the largest tech conference in central Asia, and the Kazakh government continues to pour money into the tech industry.

If Kazakhstan can manage to follow in the footsteps of countries like Finland, it may be able to gain considerable footholds in the worldwide technological industry and economy at large.

Finland, which was at one time a poor, agrarian society, is now regarded as one of the most competitive countries in the technology industry, as well as one of the societies with the highest quality of living in the world.  This is because the country managed to make itself an attractive hub for the tech industry, and used the tech industry to position itself within the global economy.

Kazakhstan is viewing the rapid uptick in the interest in and adoption of blockchain technology as an opportunity to become a society on the cutting edge of a new industry.