Can Exchanges be the Key to Mainstream Adoption of Cryptocurrency? 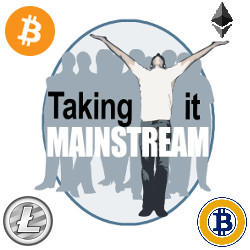 Cryptocurrencies such as Bitcoin are currently rising steadily in popularity. In fact, the total market cap for all cryptocurrencies is approximately $342 billion USD. However, despite the rising popularity of these currencies they still have not reached what many people would call “mainstream” adoption.

Bitcoin has risen to be the sixth largest currency in the world based on circulation. However, it still has a long way to go before it can compete with the most powerful currencies and commodities in the world, including the U.S. dollar, the Euro, or even gold. The monetary base for the U.S. dollar is roughly $3.8 trillion, The market cap of gold is roughly $7.07 trillion. So, Bitcoin has a long way to go to reach some of its competitors in terms of overall market cap and mainstream adoption.

Mainstream adoption for cryptocurrencies would involve people regularly using crytpos for both transactions, and as a means of storing wealth. Right now, many people are just beginning to learn about cryptocurrency. Those in the tech, and the finance worlds have had a head start in learning about these technologies, and much of the growth of the cryptocurrency industry has been fueled by these people.

However, if Bitcoin and other cryptos become mainstream, then large percentages of the populations will fully understand and will use these currencies. In such a scenario, cryptocurrencies would not be held primarily just by people with computer science, or finance backgrounds.

One of the biggest challenges to mainstream adoption is trust. The U.S. dollar, the euro, gold, and other competitors to Bitcoin have had decades, centuries, or even millenniums to establish the trust of large populations. Cryptocurrencies have only been around for less than a decade! So, many people simply do not trust that cryptos can store value over the long-term or that they will make a reliable investment.

This fact is not helped by the fact that certain public personalities such as Jamie Dimon, CEO of JP Morgan Chase have called Bitcoin a fraud, or a bubble. Also, one of the largest Bitcoin exchanges, Mt. Gox imploded in an epic catastrophe, losing the stored Bitcoins of all of its users. So, there are definitely some hurdles in terms of trust for getting cryptocurrencies to be adopted by mainstream society.

Education is also another challenge. This is because, while many people have heard of Bitcoin or other cryptocurrencies, they may not fully understand them, or how blockchain technology works. However, this is common for any new technology that comes out. For example, there was a period of time when people did not know how to send an email, use a smartphone, or even log on to the internet in general. So, as time goes on, people will most likely come to understand how to use cryptocurrencies as they have done with other breakthrough technologies. The fact that Bitcoin is being discussed so frequently in the mainstream media helps a lot with this.

Regulation is also a potential challenge to the mainstream adoption of cryptocurrencies. Bitcoin and other cryptocurrencies have been outlawed outright in a number of nations, and have been heavily regulated in others. Nations such as China have put bans on ICO’s and on cryptocurrency exchanges.

The United States, United Kingdom, Japan, and South Korea, however, have kept an open mind regarding cryptocurrencies, and a lot of the trading volume for cyrptos is coming from these nations. This can potentially have a number of benefits including higher tax revenues for these nations. However, regulatory changes are still a potential threat to the wide-scale adoption of cryptocurrencies.

How Can Cryptocurrency Exchanges Help?

Reliable and easy-to-use cryptocurrency exchanges may be able to solve a lot of the problems associated with greater acceptance of Bitcoin and altcoins. This is because reliable exchanges can help to increase trust, make cryptos easier for people to buy who are not tech-savvy, and they can help to ease concerns for regulators. So, reliable exchanges can be a win/win/win for the emerging cryptocurrency market.

Despite the fact that Mt. Gox, one of the original and one-time most powerful cryptocurrency exchanges is now defunct, there are many that remain strong and heavily used by people around the world. Some of these exchanges include Coinbase, Gemini, Changelly, and Kraken.

These exchanges are really helping to increase the amounts of people who are buying cryptocurrencies. Coinbase alone has over 10 million users, and has over $50 billion worth of cryptocurrencies traded. Coinbase is extremely user friendly, and has developed a reputation of being one of the single best cryptocurrency exchanges in the world. Its design is very clean and simple, and resembles many online banking websites that large numbers of people are used to using. So, this helps people to get used to Coinbase.

Gemini, which was founded by the Winklevoss twins of Facebook fame, was designed to be appear like a stock exchange website for cryptocurrencies. Both of these exchanges have been extremely successful, and are rapidly winning of the trust of investors. If these two exchanges, and if others like them can continue operating without major catastrophes such as the Mt. Gox incident, then it will go a long way towards wider cryptocurrency adoption.

Gemini even goes as far as to mention that the exchange is “regulated as a trust company by the New York State Department of Financial Services (NYSDFS).” Further they explain their secure storage for cryptocurrencies by saying:

“All U.S. Dollar deposits are held at FDIC-insured banks. The majority of digital assets are stored offline in our proprietary, state-of-the-art Cold Storage system.”

Efforts such as this to demonstrate both security, and compliance with regulatory agencies help to calm investor fears about a lack of trust, or about cryptocurrencies being scams that will result in eventual disappearance of funds, as with Mt. Gox. As time goes on, exchanges such as Coinbase and Gemini will likely find ways to become even more secure. The more secure, easy to use, and compliant with regulatory agencies they can become, the faster that they can help to create mainstream acceptance.

Other Factors That Could Lead to Mainstream Adoption

There are a number of other things that could help lead to mainstream adoption. For starters, if another major financial crash occurs, this could send people fleeing into the cryptocurrency asset class. The last financial meltdown, which occurred in 2008 led to a number of major financial institutions, such as Bear Stearns and Lehman Brothers, completely collapsing. The stock market also plummeted in 2008.

As a result of the 2008 housing market crisis and financial collapse, people lost a lot of trust in banks. Many banks had been selling bundles of very risky subprime mortgages that had been rated highly when they shouldn’t have been. A lot of trust in ratings agencies was also lost, and the government ended up printing billions of dollars in order to save a number of big banks and companies to prevent even more companies from going bankrupt. The result of the money printing or “quantitative easing” was that higher levels of U.S. dollars entered circulation, thus devaluing the value of every dollar already in circulation.

During this time, many people fled into assets that were viewed as safer, such as gold and silver, which drove the prices of both of these assets up. Cryptocurrencies were not around during the 2008 crash. However, they are now, and if another stock market crash happens, then it could lead to people flooding into cryptos to prevent losing purchasing power, as many people who were holding stocks or toxic subprime mortgage securities did in 2008.

Another thing that could help to fuel a rapid adoption of cryptocurrencies is if several key companies begin accepting Bitcoin, Ethereum, or other altcoins for transactions. Some of these key companies include Amazon, Target, and Walmart. These are companies that millions of people use very frequently and are responsible for incredible numbers of transactions. So, if these companies join other companies like Expedia and Virgin Galactic in accepting Bitcoin, it could really help to speed things along.

In the near future, cryptocurrencies could be used more and more frequently. Whether or not exchanges such as Coinbase and Gemini can continue to uphold their excellent reputations will have a major impact on the adoption rate of Bitcoin and other cryptos. Right now, trust is steadily building for these exchanges. However, if another giant exchange failure happens, like it did with Mt. Gox, then it will likely be a major setback for cryptocurrency adoption.

The reason why the exchanges are so crucial is because they are one of the primary ways to actually get the cryptocurrencies in the first place. Many cryptos can be obtained through mining, but only very tech savvy people tend to obtain them this way.

Many of the main cryptocurrencies such as Bitcoin, Ethereum, and Litecoin have also skyrocketed in price in recent years. If prices for these currencies continues to rise, then this will also help to create more and more interested in cryptocurrencies.