The BitConnect Fraud Aftermath: BCC Price Drops by Over 90% 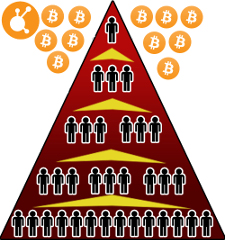 BitConnect was supposed to be an “all-in-one” cryptocurrency community lending platform. The platform was originally designed to provide multiple types of investment opportunities. It has been labelled as a scam and a Ponzi scheme by hundreds of cryprocurrency pundits, and the events of this week haven’t done anything to help the reputation of the coin. Previously this week, the price of BCC dropped by over 90%, leaving thousands of investors in the red.

BitConnect (BCC) has built a business model around lending and paying its investors daily interest. This works by BitConnect taking Bitcoin (BTC) and converting it to BCC tokens. They then pay out daily interests from the proceeds that their “trading bot” generates. The interest rates are extremely lucrative, listed at about 1% per day, which sounds almost too good to be true. As they say: “if a deal sounds too good to be true, it probably is.” Any good speculative investor would ask the question: “why?”

This business model raises red flags all over the place, with hundreds of key unanswered questions still remaining to this day. For example, imagine you are able to get 1% per day on $100K, in one year, you would hypothetically make over $350k. This is either pure magic, a new revolutionary trading skill, or an outright scam.

Despite all of this, BitConnect actually does run on the blockchain. Our research shows that the company had already done a pre-mining of close to 5 million coins and they adopted the Proof of Stake protocol: where you are given interest for not selling your coins, as owners are rewarded for their “stake” in the token. This concept gave the original owners of pre-mined coins the ability to accumulate massive amounts of interest on their holdings.

This business model has led BitConnect to be subjected to some serious scrutiny not only in recent weeks, but at many points throughout its shaky history. This has included backlash from the greater crypto community. Even the SEC has gotten involved; sending at least two “cease and desist” letters to the leaders of BitConnect.

On Tuesday 16th January, BitConnect was hit by a major price drop of about 90%. The price dip was as a result of an announcement that BCC was shutting down its lending and exchange operations; one of its main selling points. This meant that BCC investors were unable to sell their tokens even after the site announced that it would stay open and online for another week.

If you look at the price drop of the BCC token, at the beginning of the year it was trading on an average of $400+. After the Tuesday announcement, the 90% drop in price saw the coin trading as low as $17 at one point.

Even though the coin announced that it would remain open for the rest of the week to enable investors to sell their tokens, a landslide of online complaints via social media indicate that this was not the case. The trading platform wouldn’t allow them to process transactions and the alert given was that the exchange was unavailable.

In a follow-up statement by BCC on their official website, they stated that:

“[the] price drop is the direct result of us releasing all of our members coins at one time.”

“For next 10 days we are allowing members outside the U.S.A, to participate in the BitConnect X ICO with BCC at $150. This is to support existing coin holders and give the BCC coin some initial stability after these recent events” the statement read.“

BitConnect has all the footprints of a pyramid scheme with their Multi-Level Marketing (MLM) model. This on its own raises eyebrows as I am yet to see one MLM that actually works. The information on their website is sketchy as to how their algorithms for their trading bots work and how they arrive at such crazy interests of almost 700% per year.

Further, they are yet to provide a whitepaper and all that their platform claims to accomplish is done in “theory” with no proof. There are no smart contracts or any legal means to assure you that their investors’ money is safe. That being said, they could easily run with their investors money and there is very little anyone could do about that.

Just like any other pyramid scheme, the people at the top are the ones who will now benefit, and the rest that are left counting their losses. The SEC seems to be going after BitConnect, so there is still some hope that they will be able to hold the founders accountable if any financial crimes were committed, which seems to be pretty likely.