Bitcoin Private (BTCP) is a cryptocurrency that was “fork-merged” from Bitcoin (BTC) and Zclassic (ZCL). It combines the convenience of Bitcoin payment processing with the privacy of Zclassic. By doing so, it has created a network with low-cost, fast, and private transactions; a true fulfillment of Bitcoin creator Satoshi’s Nakamoto’s original vision.

Bitcoin Private was specifically designed to fix the problems that have plagued Bitcoin in recent years. Some of Bitcoin’s biggest issues are its small block size, long difficulty adjustment period, slow tx confirmation times, a lack of privacy, and the development of ASIC mining devices that have centralized Bitcoin mining.

The project was originally proposed by Rhett Creighton, the founder of Zclassic. Creighton and his team expressed interest in creating a private cryptocurrency based on Bitcoin’s code base, and the result was Bitcoin Private.

Like Bitcoin, Bitcoin Private’s total supply is capped at 21 million coins. BTCP was launched in February 2018 via a massive airdrop to both BTC and ZCL holders that put almost the entire available supply into circulation (20.3 million coins).

BTCP began trading on the market at $65 USD. In April 2018 its value rose to ~$77 USD with a market cap of ~$1.5 billion USD, but it tumbled to less than a third of its original price in the following months.

The price spike was likely caused by BTC and ZCL holders dumping their free BTCP into the market. BTCP’s value has never recovered from that dump.

Bitcoin Private takes the best parts of Bitcoin and Zclassic to create something new. Its developers made some changes to Bitcoin’s code base to give Bitcoin Private a larger block size (2 MB), a shorter block time (2.5 minutes), and Zclassic’s ASIC-resistant proof-of-work (PoW) mining algorithm, known as Equihash.

Through Zclassic’s technology, Bitcoin Private gained the ability to shield transactions. Users can choose to use either public or private addresses. Public addresses operate on the same principles as Bitcoin – all funding sources, destinations, and amounts are transparently recorded on the blockchain.

Private addresses, on the other hand, shield those details and guarantee transactional privacy through the use of Zero-Knowledge Succinct Non-Interactive Arguments of Knowledge (zk-SNARKs). Transactions are verifiable but they can’t be deciphered by any third party.

Bitcoin Private vs. Other Bitcoin Derivatives

Over 50% of Bitcoin miners would have to consent before any changes can be made to Bitcoin’s code, and it doesn’t look like that’ll happen any time soon. This has led to several hard forks of Bitcoin to create new cryptocurrencies (Bitcoin Gold, Bitcoin Cash and others) which have attempted to fix Bitcoin’s shortcomings. Here is how Bitcoin Private stacks up against those cryptocurrencies: 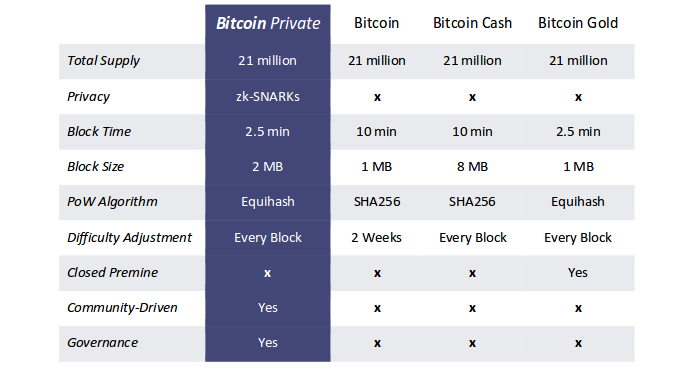 BTCP is only listed on a handul of smaller exchanges including HitBTC, Trade Satoshi, Nanex, Sistemkoin, Altcoin Trader, and Exrates.

For storage, the BTCP developers recommend the full-node desktop wallet or Electrum. Both are available on Windows, Linux, and OSX devices. Paper wallets are another good choice for long-term storage. Coinomi is the only option currently available for mobile storage.

BTCP’s liquidity is not great for a coin in the top 50 cryptocurrencies. The project has received a lot of criticism for giving away pretty much the entire available supply to BTC and ZCL whales, which goes against its decentralization ethos.

Zclassic also doesn’t have the best reputation in the crypto community because of its embattled past. Its developers have been accused of numerous questionable actions, including rumors about illegal insider trading on Bittrex that caused a 98% drop in ZCL’s price.

Bitcoin Private looks like Zclassic’s attempt at regaining some of its lost strength, but it hasn’t paid off yet. Many investors purchased large amounts of ZCL right before the fork with the intention of receiving free BTCP in their wallets. They dumped both ZCL and the free BTCP into the market for a quick profit, causing the price of both coins to crash.

When you consider all of these variables, it’s not really surprising that BTCP has poor market liquidity.