Warning: file_get_contents(https://api.coinmarketcap.com/v1/ticker/?convert=EUR&limit=0): failed to open stream: HTTP request failed! HTTP/1.1 404 Not Found in /home/worldcrypto/public_html/wp-content/themes/CryptoTheme/functions.php on line 161
 Power Ledger | POWR Price, Where to Buy POWR and How it Works

Power Ledger (POWR) is a blockchain trading platform that enables consumers and businesses to sell their surplus energy without using a middleman. The project was launched in May 2016 with the goal of connecting people living in high-density housing areas to a distributed renewable energy economy. By doing this, they are hoping to re-invent existing electricity networks and provide an incentive for the connection of distributed energy resources (DER).

Power Ledger has already experienced some successes. In August 2016, it deployed and tested Australia’s first P2P energy trading network. It followed up that success by building the world’s first P2P blockchain-based energy trading platform on a regulated distribution network in New Zealand.

POWR was launched in a pre-sale on August 27, 2017. Power Ledger sold over 100 million tokens and raised $17 million AUD. The public ICO was held on October 6, 2017, and reportedly raised an additional $17 million AUD from 15,000 contributors. The ICO was biggest crowd funding effort ever held in Australia and the 14th highest in the world.

During the ICO, 1 billion POWR tokens were created. They are allocated as follows:

In the months following its release, the value of POWR went through the expected ups and downs of a new token. It was first listed at ~$0.05 USD and its price shot up to reach an all-time high of ~$1.84 with a ~$663 million USD market cap in January 2018. The price has since stabilized and now hovers between $0.20 and $0.50 USD.

To join the network, users receive a registration email from their local application host with a link that takes them to a page where they can create a user profile and password, and that’s it. Once a user is logged in, they can see their energy consumption and trading transaction details.

Power Ledger utilizes two different digital tokens: POWR and Sparkz. POWR is the fuel of the ecosystem. It is a utility token that gives application hosts and participants access to the Power Ledger platform as well as its P2P trading features. POWR interacts with the ecosystem through:

Electricity sold on the platform is traded using Sparkz. This token is priced, issued, and redeemed in the local currency of the platform participant. For example, 1 Sparkz = 1 AUD in Australia. Sparkz tokens don’t have a fixed supply; they are generated as required and are destroyed when redeemed.

POWR and Sparkz are separated to protect consumers and to make the pricing of local electricity easier. If the market inflated the price of POWR, it wouldn’t affect the cost of electricity for consumers

Application hosts are required to escrow POWR tokens proportionate to the amount of Sparkz they receive from the platform. The POWR tokens are held in “smart bonds” and can only be unlocked when the Sparkz tokens are redeemed.

Smart bonds are Ethereum smart contracts designed to protect consumers if an application host fails (i.e. bankruptcy). In such an event, consumers can return their Sparkz directly against the POWR tokens provided as surety. The amount of POWR tokens locked up in smart bonds and the amount of Sparkz created will be transparent to all platform members.

Sustainability is one of Power Ledger’s core values. The developers want to do everything they can to minimize the amount of energy consumed by a proof-of-work algorithm, so they designed Power Ledger as a hybrid of a public and consortium blockchain. The project will eventually transition to a public blockchain with a proof-of-stake consensus mechanism.

The public layer uses the Ethereum blockchain. This layer operates independently and is outside of Power Ledger’s control, but it provides the network with security and smart contract functionality. Through POWR tokens, the public layer provides a mechanism for transacting with the consortium and application layers.

The consortium layer uses the EcoChain blockchain. EcoChain is a private proof-of-stake blockchain that was developed in-house by Power Ledger. It has been live tested for stress in high-load energy markets and has provided valuable insights into the use of blockchain technology for energy data collection and settlement.

Sandwiched between the public and consortium chains is the Power Ledger Core, which is made up of public smart contracts. These smart contracts implement the key components of the POWR token ecosystem, such as: 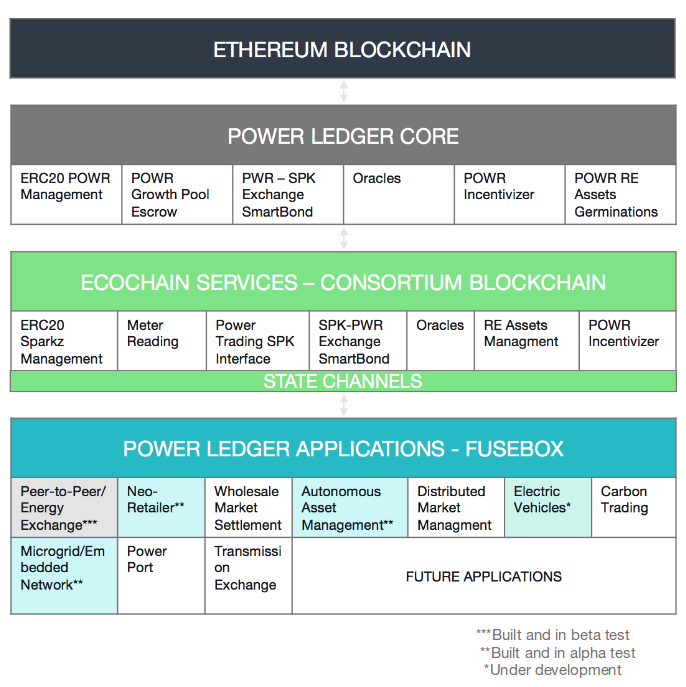 The application layer seen above is like the fusebox. It’s where the magic happens. Power Ledger’s P2P trading application allows direct trading between consumers with or without the inclusions of market operators, transmission network operators, or retailers.

The trading application is designed to work with existing market structures and regulations. It can evolve and continue trading when policy changes are implemented in the operating environment. Since all energy transactions are performed with Sparkz tokens, the trading application can be applied across different countries even if they have wildly different electricity pricing structures.

Power Ledger vs. Other Blockchain Projects

Power Ledger isn’t the only blockchain project trying to revolutionize the energy industry, but it is one of the early pioneers in the distributed energy trading space. It stands out because it has a solid team made up of experts with experience in both electricity and blockchain markets, and it has a working product that has been tested in real-world environments.

POWR tokens can be traded on a number of large exchanges including Binance, Bittrex, Bithumb, KuCoin, and Bancor Network.

POWR is an ERC20 token so it can be securely stored in any wallet that supports the standard. Popular online wallets that support ERC20 tokens are MyEtherWallet (MEW), Jaxx, MetaMask, and Exodus. Hardware wallet options include Trezor and the Ledger Nano S.

Power Ledger has enough funding to keep it going for at least the next few years. In addition to the $34 million AUD it raised during the ICO, Power Ledger has also received several grants for examining the potential of blockchain technology in integrating distributed energy systems.

The project has had enough accomplishments since its launch to help it maintain good liquidity. It is without a doubt a promising venture with legitimate backing, and it will be interesting to see how it fares in the coming years.