Similar to its slightly older brother, Bitcoin Cash (which was created in August as a result of SegWit 1x), Bitcoin Gold experienced a serious death-drop shortly after it appeared on the scene.  However, the devaluation of Bitcoin Gold came relatively a bit earlier than Bitcoin Cash’s.

Why does this happen?  The reason is relatively simple–when a new cryptocurrency is created as a result of a fork of an established cryptocurrency (like Bitcoin), everyone who held that first cryptocurrency suddenly gets an equal amount of the new coin.

The new coin cannot easily be sold or traded until it is added to an exchange.  Therefore, there is a short period in the lives of these newborn cryptocurrencies when their value is artificially inflated.  As soon as it becomes easy to exchange these new coins, however, users begin to “dump” them en masse onto exchanges.  Thus, the drop.

It’s unclear exactly what the big drop will mean for the future of Bitcoin Gold.  If it can manage to follow in the footsteps of Bitcoin Cash, it will probably survive. At least, for a while.

Some members of the crypto community are concerned about the effect that the ongoing series of forks will have on Bitcoin in the long term.  Sol Lederer of Loomia told CNBC that “These forks are very bad for bitcoin. Saturating the market with different versions of bitcoin is confusing to users, and discredits the claim that there are a limited number of bitcoins — since you can always fork it and double the supply.” 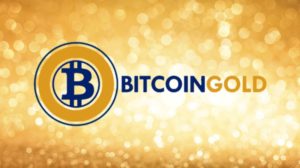 Why Did the Fork Happen?

As Bitcoin continues to be adopted as a means-of-payment and an increasing number of transactions take place on its network, the network grows increasingly slower.  This happens because in order for a Bitcoin transaction to be confirmed, the transaction must be added to Bitcoin’s blockchain.

The slowing has happened because the blockchain can process a maximum of one megabyte’s worth of data every ten minutes.  These little pieces of data are called “blocks”, and the Bitcoin Core developers chose their limited, one-megabyte size.  This small block size is the essential reason that the network operates so slowly.

Let’s explore this further with a metaphor. Imagine that you are trying to catch a train that only has 12 seats and only comes every 10 minutes.  If there are only a handful of people waiting for the train, you can all catch the next one and get on with your lives.  Now imagine that there are 700 people trying to catch the same train that still only has 12 seats. Yeah. It’s gonna take a while.

All of Bitcoin’s hard forks have sought to solve this problem in one way or another.  Some of the cryptocurrencies created as a result of a hard Bitcoin fork have increased the total number of coins in circulation.  Others, like Bitcoin Cash, had a larger block size that would allow more transactions to be confirmed at once.

Bitcoin Gold is a cryptocurrency that has a decreased mining difficulty.  What is mining? Computers called “nodes” that are responsible for upholding a cryptocoin’s network also perform the duties necessary to confirm transactions.  This process involves solving increasingly complex equations.  In return for mining, the nodes receive rewards in the form of crypto tokens.

Because the mining equations become more difficult as more crypto tokens are “mined”, increasingly high-powered (and expensive) equipment is required to perform the mining duties.  In turn, fewer and fewer Bitcoin users choose to become miners, another factor that has contributed to the slowing of Bitcoin’s network.

The Future of Bitcoin

There’s been quite a bit of debate in the Bitcoin community about what Bitcoin actually is.  It was first conceptualized as a sort of “digital cash”–a currency that could be used to transact quickly and anonymously in digital and online spaces.

However, because Bitcoin’s long transaction times and high fees have caused it to be unsuited to be used as the digital cash that it was intended to be, other members of the Bitcoin community have begun to think of Bitcoin as a settlement layer that can be used as a platform for the creation of applications and other cryptocurrencies.

What is your opinion on this latest hard fork and the future of Bitcoin? Leave a comment–we’d love to hear from you.