Lightning Network: What is it and How Can it Help Blockchain Technology? 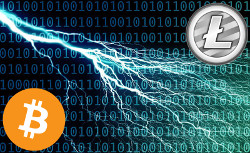 Because Bitcoin has grown so rapidly, increasing from a price of just 5 cents in 2009 to roughly $16,500 in December of 2017, scaling has become a major issue. The Bitcoin protocol has a limited block size of only one megabyte per block. This means that only about 7 or fewer Bitcoin transactions can be processed per second.

So, in terms of competing payment systems, Bitcoin is actually very far behind when it comes to scaling. The reason why this problem exists is either because the original creator of Bitcoin, Satoshi Nakamoto did not anticipate the massive amounts of Bitcoin transactions that would eventually take place, or because he simply figured that a solution would present itself as time went on. The Lightning Network could be the exact solution that he might have anticipated.

However, regardless of what Satoshi Nakamoto’s motivations were for creating the block size limit of one megabyte, it is definitely a problem, and it is only likely to get worse as more and more people start using Bitcoin regularly for transactions.

How can the Lightning Network Help?

So, hypothetically, the Lightning Network could solve all of the scaling problems of Bitcoin and potentially even make Bitcoin transactions much more efficient than even Visa transactions. This could prove to be instrumental to the continued progress of Bitcoin. After all, if hundreds of millions, or even billions of people start using Bitcoin, then many transactions must be able to be processed every second to prevent slow transaction times and high fees.

How Does The Lightning Network Work?

The Lightning Network is a brilliant invention, and it adds an extra layer of power to the Bitcoin network. However, it is still very secure, and requires the approval of both end users on each transaction to give their approval for the transaction. If approval is not given, then the transaction does not go through.

What Will Happen if The Lightning Network Reaches Full Adoption?

If the Lightning Network is completely adopted by Bitcoin, and by other cryptocurrencies, then it a number of important things could happen. The first is that Bitcoin could overtake all other payment systems as the one that has the best scalability, and the greatest processing power. If this happens, then it could cause even more people to flood into Bitcoin, as the scaling issue has been a cause for concern with Bitcoin, and has even contributed to Bitcoin hard forks, such as Bitcoin Cash.

If Bitcoin’s popularity soars due to a successful Lightning Network implementation, then its price could potentially go significantly higher. Another factor that could contribute to a price rise is the fact that there is a steadily dwindling supply of Bitcoin being produced. Only 21 million Bitcoins will ever exist and roughly three quarters of them have already been mined. Generally, as supply decreases and demand increases, it results in higher prices.

Perhaps the most important change that could take place if the Lightning Network is fully adopted is that people all around the world who use Bitcoin will not have to wait ten minutes or more for all of their Bitcoin transactions to go through. This means that Bitcoin could become a more reliable and preferred transaction method for big businesses who operate on tight schedules. There is a big difference between having a transaction validated in ten minutes vs. a tenth of a second, and this difference could impact many people.

Potential Challenges to The Lightning Network

The Segwit2x block sizes would be 2 megabytes instead of just 1. Some people in the Bitcoin community prefer this solution. However, even a doubling of the block size would not make Bitcoin as scalable as the Lightning Network would. However, in the end, SegWit2x did not have consensus and wasn’t implemented.

Another key problem that the Lightning Network could face on its journey to full adoption is opposition from Bitcoin fundamentalists who believe that no changes should be made to the original Bitcoin protocol. Many of these people argue that the Bitcoin protocol has been extremely successful thus far, and it should not be changed at all. Considering that Bitcoin is rapidly approaching a price point of $20,000, it is somewhat difficult to argue with these people.

Final Thoughts on The Lightning Network

The Lightning Network has the potential to dramatically change the cryptocurrency landscape and to make it much more appealing to outsiders who have not gotten into cryptocurrencies yet. After all, it is easier to sell people on a one second transaction time than it is to sell them on a transaction time of ten or more minutes.

Faster transaction times can help individuals, businesses, charities, and even governments if governments one-day start using Bitcoin or other cryptocurrencies for various types of transactions. However, many governments have shown a hesitancy to deal in cyptocurrencies. That is probably because doing so could make their own national currencies appear weaker or inadequate.

The Lightning Network is one of several key breakthroughs that could have an extremely positive impact on the Bitcoin protocol. Atomic swaps, which let people instantly convert their cryptocurrencies into other cryptocurrencies is another major breakthrough. Atomic swaps have already begun to be used by members of the cryptocurrency community. However, the Lightning Network is farther behind on its trek towards full adoption. It has many obstacles get through first, before it can arrive at this destination.

When Will The Lightning Network Be Released?

There are many in the Bitcoin community who believe that this will be one of the most significant steps forward for Bitcoin since its inception in 2009. There are currently about 350,000 Bitcoin transactions that take place every single day. However, if the Lightning Network goes live, then this number could be dwarfed by the amount of transactions that start happening on a daily basis.